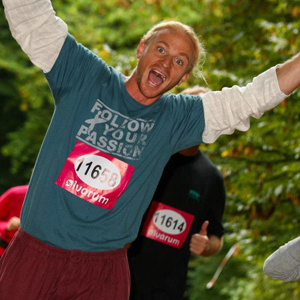 How Falko Rediscovered His Passion

For seven years, Falko’s passionate heart and rational mind played tug of war with his soul. Financial problems also added to his woes, which drove him to depression, forced him to question his life’s purpose, and stretched his relationships thinner by the day. His self-destruction continued as he embraced self-pity and dependencies. Bad habits also piled up on list of faults and caused him to live in the darkness of disorientation. Luckily, the end of Falko’s fall came to an end.

At the age of 34, Falko was approached by a friend to run in the ‘Heroes Race’ which took place at his hometown Cologne, Germany. What made this an irresistible offer was the fact that the race’s proceeds were to be donated to helping the children of New Delhi, India. So he collected 2,500 Euros with the help of friends and relatives and took part in the race. His contribution along with those from participating organisations managed to bring the donation amount to a staggering 25,000 Euros.

By participating in the race, Falko allowed the light of his passion to shine through. He also managed to remember the words of one of his former coaches, Henk Diepbrink, “If you eat a hamburger every day, nothing will happen for a while, but after twenty or thirty years, you will get a heart attack. Mistakes repeated every day will eventually lead to a disaster.” With these newly-rediscovered revelations, Falko decided that it was about time that he took action in his personal life.

He refused to wallow in self-pity, especially because it was caused by betraying himself and not following his passions for a long time. He put a lot of effort into rediscovering his passions and reviving them to claim as his own again. Though he is still planning how to follow them, he understands completely how precious and essential a passion can be for inspiring oneself and helping others.

Falko constantly refers to the ‘Heroes Race’ as the event that helped him open his eyes. He also cherishes the race since it is one of the things that helped him get back on track and inspired him to work towards helping people, a passion he had had for many years. To every passion seeker and enthusiast, he says, “Small things like passion can make a change, give you inspiration and help you catch fire! Go for those things; help others, help yourself! Start NOW!”